I hope you’ll stay with me as I do something on this site that I don’t do very often- get personal! I’d like to share an experience that happened to my family a few years back with the hopes it will help even just one of you who might be reading. 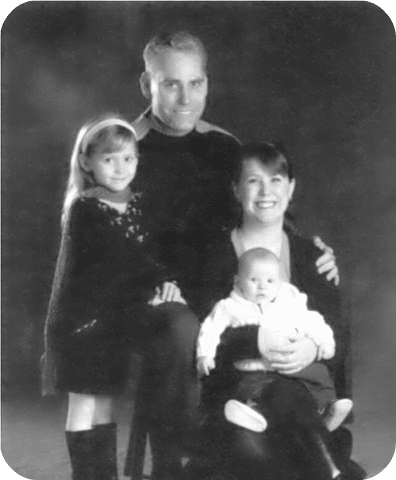 This is my uncle Chip and his family. Chip is my mom’s younger brother. He is the only boy born into a family of 11 kids! (Can you imagine being the lone boy with TEN sisters!?!?!)  I grew up living right around the corner from my grandparents house, and I have great memories of hanging out with my uncle before he grew up and moved to Seattle. {And I use the term “grew up” loosely.} 🙂 As a young adult, he had a super cool jeep and he would take me and my sisters for rides in muddy fields that would kick up mud everywhere! I also remember laughing with him (much to my mom’s dismay) as he fed my little sister cat food… on more than one occasion!

Chip is the ultimate prankster! I think living in a house full of girls had to present him with some great opportunities to play practical jokes, and all that practice made him a master. Even as an adult, it seemed like me and my cousins were on an eternal quest to play the ultimate prank on him. Often before we could even plot our attack, he would look at us square in the face and say his famous quote, “Revenge times seven”, meaning whatever we did to him, we could expect a return that was seven times as harsh. Needless to say, aside from small annoyances, I don’t think we ever got him. His threat was always enough to scare me off!

Chip met and married my aunt Tiffany. Their wedding reception will go down in history as my favorite reception of all time! I was 12 and Tiffany had a lot of cute brothers. And there was dancing. Enough said.

Chip and Tiffany started their family with a beautiful little girl, Audrey. A few years later, their cute son Henry was born. Their small, beautiful family was now complete.

But you know how life has a way of handing you surprises? Some surprises are wonderful and exciting. Other surprises…not so much. Just days after his son Henry was born, Chip was diagnosed with stage 4 color cancer and was given a very short time to live. He was only 38 years old.

Our family members and close friends rallied around him and his young family. We prayed like we had never prayed before- asking our Heavenly Father to extend Chip’s life so his children would have a chance to get to know him. Chip took part in some crazy cancer treatments and he gave a good fight. His strength gave me hope, it strengthened my faith and it filled me with a new admiration and love for him.

He lived his life to the fullest, not wasting a single day to make memories with his family and show them how much he loved them. In May of 2007 they went on a 3 week roadtrip in an RV and visited all of Chip’s siblings. The week he spent with our family in Arizona will never be forgotten. He returned home to Washington on a Thursday and told his wife, “This is the greatest vacation I have ever had; it is the best time of my life.”

Two days later, at the young age of 42, my practical joke-playing uncle Chip passed away in his home, surrounded by his family and friends.

The reason behind me telling you this is two-fold:

First, I still think about him and his family all the time. Writing my thoughts and sharing them publicly is my way of making sure his memory is not ever forgotten.

Second, I can’t help but wonder how differently things would have been had his colon cancer been detected earlier, before it was too late. And so I wanted to take a minute today to tell each of you just how important and LIFE-SAVING early detection is. And also how easy it is to get tested for it!

It’s Colon Cancer month and I’ve partnered with Myriad Genetics to help draw attention to a genetic test that allows people to see if they carry the gene for colon cancer.

The cool thing about the screening is that it’s a simple blood test that identifies if you carry the gene for certain types of colon cancer. If you do have the gene, you know from a younger age that you should be getting colonoscopies more frequently to prevent anything from happening in the future. Colon Cancer is the second deadliest form of cancer in the U.S., yet it doesn’t have to be. It’s more than 90% preventable.

Here’s the bottom line…we want you to get screened. We know you’re busy, but Colon Cancer can be prevented! So take some time to find out if you’re at risk. If it turns out you’re at risk, knuckle down and get a colonoscopy! Make an appointment with your doctor today!