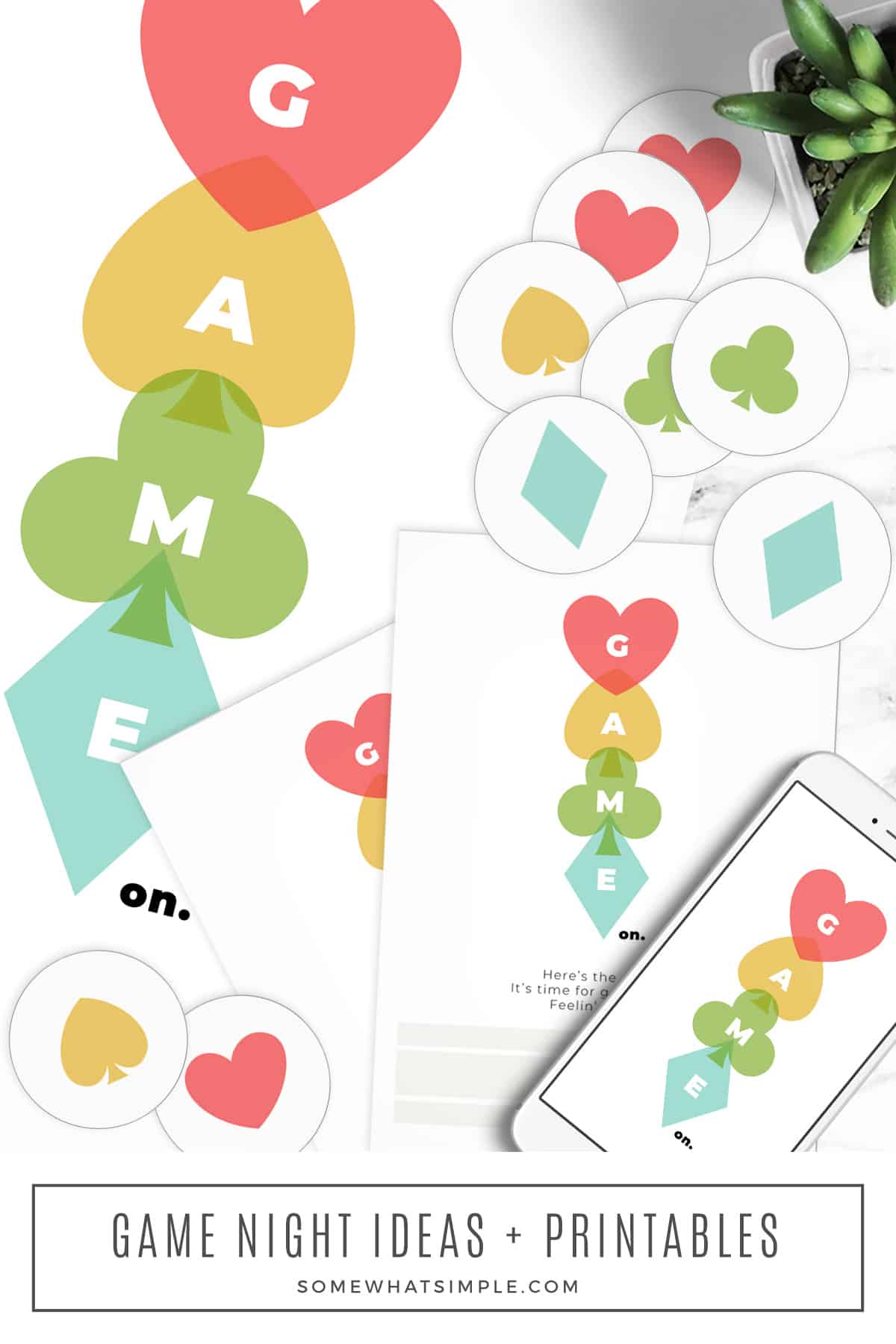 Whether you’re playing with just a few friends or a huge crowd of couples, these adult party games are sure to entertain! Download our party printables to make the night even better!

We’ve planned a lot of group dates over the years that have been a ton of fun! White Elephant Parties are entertaining, and our High School Reunion Party and festive New Year’s Eve Party were a blast, but a casual night playing games is one of my very favorite group date ideas!

My husband and I recently started planning monthly game nights with 4 other couples in our neighborhood. The 10 of us pick one night a month and we go out for dinner and then head to one of our homes until the end of the night for games and non-stop laughter!

We all take turns hosting, and the host couple will usually provide drinks and treats for the guests. But we all bring whatever games we’ve recently discovered, and we definitely have our list of ones we LOVE!

If you’re looking for some fun couples party games to play at your next get-together, here are some of our very favorite adult party games! These adult games are perfect for any gathering and it doesn’t matter if it’s a group of couples or not.

Every time we get together for a game night with our friends, we always try out a new board game. Here are several of the best board games we’ve played so far.

If a board game isn’t your thing or don’t have time to pick one up, here are some of our favorite adult party games that can be played with items that you already have at home.

Four people are chosen for each round. Three of the four are taken out of the room where they cannot hear or see what is going on in the party room. The person that remains is given something to act out – look at the list below for some ideas. Before they start their act, one of the adults who were out of the room is brought back in. They are told to watch the first person’s act very carefully.

Here are some fun scenarios to act out:

This game is a blast!!! Many times we were all laughing so hard that we were crying! Anyone who ever plans another adult party needs to try this game! We had a really fun crowd, and that is a must, but I can’t see how this would not be funny anywhere!

We chose a panel of 5 people to be our panel of liars. These 5 people were taken into a room beforehand and given a look at 5 of the most random items you could find around your house. It could be parts of or pieces of something or that random tool in the garage only your husband knows how to use. My brother-in-law is an avid hunter, and the rest of us are not, so one item I remember using was some kind of hunting whistle that looked like a clothespin or something. Just get creative and be random!

The panel is told the real use of each object, but only 1 person on the panel will recite that purpose to the audience- the other 4 members will have to bluff and come up with their own idea on how it can be used. Assign who will be giving the right answers for each object, then give everyone some time to decide what they will say about each object.

How to Play This Party Game

Divide the rest of the audience into teams. You can do this as couples and have multiple teams, or you can split the room down the center and just have team 1 and team 2. When the panel of liars is ready, have them come out and sit in front of everyone. The host will show the audience the first object and then the panel will go in order down the line giving their explanation of how it is used. The teams then guess which panel member was giving the actual purpose of the object.

The team(s) who guess correctly get a point and you move on to the next round with the next object. Keep track of all the points and award the winning team with a candy bar or special treat!

Before the game begins, each player receives a pen and several slips of paper (usually 5-10 depending on how large the group is) and writes the name of a well-known person on each slip. The names can be famous people, both real and fiction, or people that the majority of the group knows (ie. The principal at school, the crazy neighbor down the street, etc.) Put all the slips of paper into a bowl and split the group into two teams.

There are 3 rounds to this game:

Round One- The team with the youngest person goes first. They select a player to give clues to the rest of his or her team. Play begins when the clue-giver picks a name out of the bowl. From that moment, they have one minute to get their team to guess as many celebrity names as possible before time runs out.

In round one, the clue-giver can say anything he or she wants as long as it is not any part of the celebrity’s name or a direct reference to the name. For Dolly Parton, it is acceptable to say, “She has her own theme park in Tennessee”, but not, “She has a theme park called ‘Dollywood’.” It is also illegal to give clues such as, “Her name begins with a ‘D’.” It is permissible to use other similar named people as clues. For example, “President Obama’s wife’s first name is the same as this person.”

When the team guesses the celebrity name correctly, the clue-giver draws another name from the hat and continues until time is up or there are no more names in the hat. If an illegal clue is given, that name is set aside and another name is drawn from the hat.

The next team then picks a clue-giver and round 1 continues until there are no more names in the hat. Teams must rotate the clue-giver each round until every member of the team has been given a chance.

After all of the names have been guessed in round 1, they are returned to the hat.

Round Two- The second round proceeds in the same manner, except that the clue-giver is now limited to only one word. The word can be repeated many times, but only one word is allowed. Hand and body gestures are permitted and encouraged!

Round Three- In the third round, the clue-giver cannot speak at all, but must suggest the name to his or her teammates using only hand motions, gestures, and pantomiming, similar to Charades.

After all the names have been guessed in the third round, the team with the most points is declared the winner.

It is important to remind the players to pay attention to the descriptions at all times. They need to learn about the named people in case they have to describe or guess it in the following rounds.

So there you have it! Our favorite Adult Party Games!

Enter your name and email address in the form below for immediate access to our printables. Here’s what’s included in this kit –

Now get out there and plan a party already!!!