Being a mom of 3 boys sometimes it’s difficult coming up with a fun birthday theme for their parties. One year my son wanted to have an army birthday party so we came up with this fun army party idea and it was a huge hit! 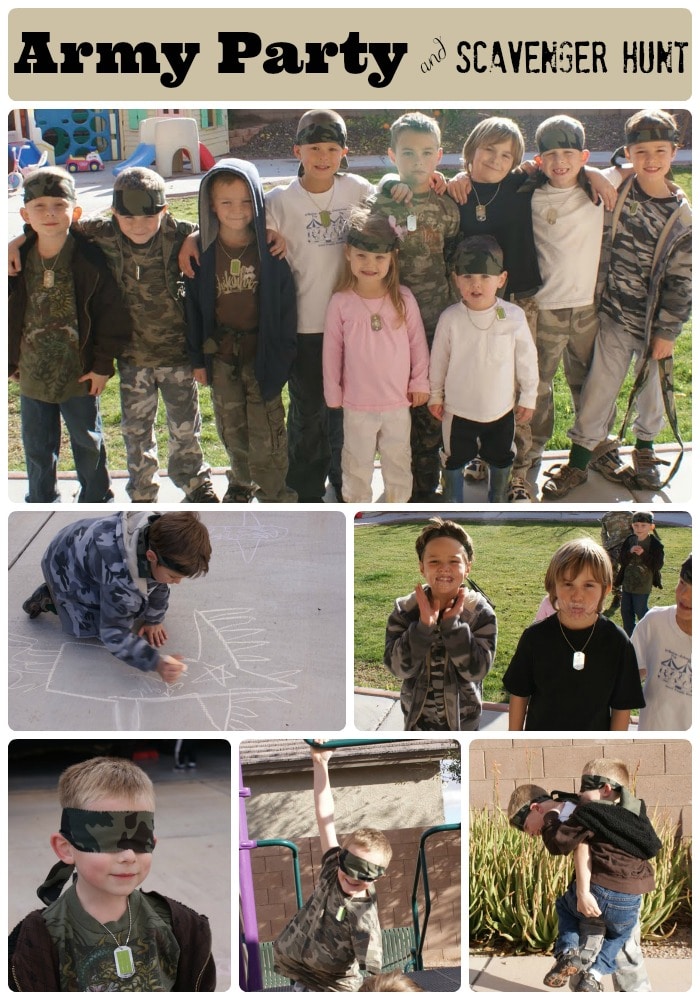 When my oldest son turned 7 he asked to have an army birthday party. I think it was his way of getting to wear his army costume from Halloween one more time! (Do you have boys that want to dress in camo from head to toe too? It has got to be a boy thing.) Birthday parties around here are never anything huge or fancy- its always like a step above a regular play date. This army birthday party was right in-line with that, nothing too fancy, it wasn’t a stress to plan any of it, but it really was a lot of fun. Here is what we did: 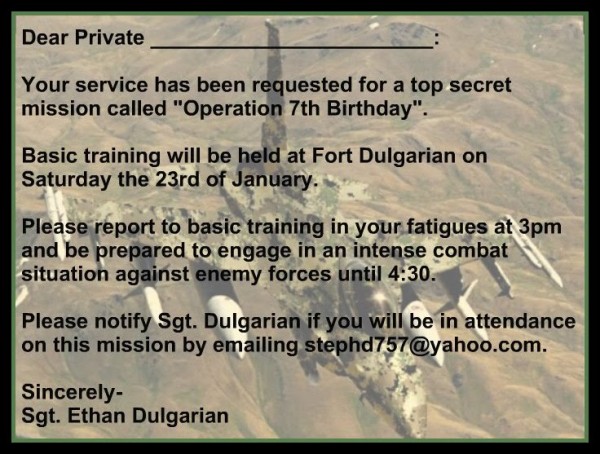 Ethan and I browsed a bunch of military-ish images and I made this simple invitation by adding text on top of the images. (Use Canva for this.) 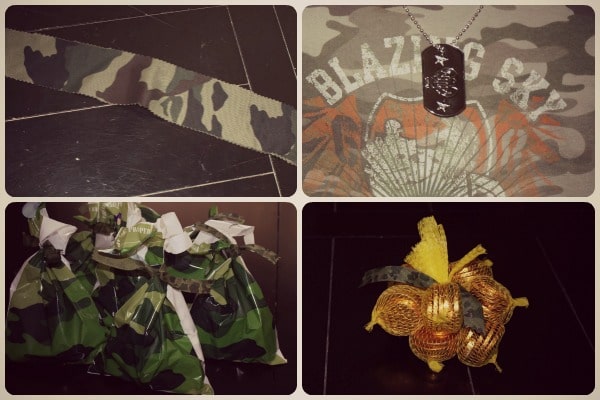 Other than the main activity (below), I also bought and prepped the following: 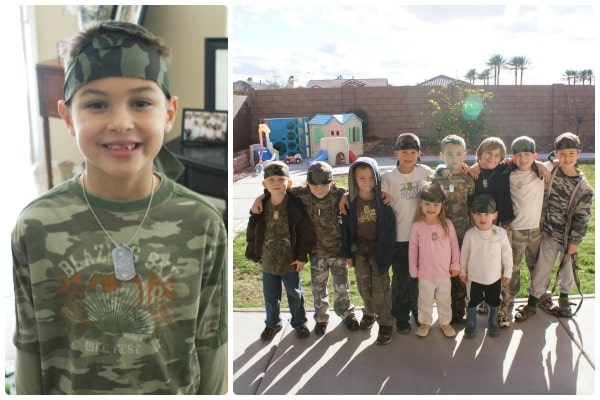 Ethan’s friends (and younger siblings) arrived in their army gear and were immediately entered into “Basic Training” after being read the following letter:

Dear Soldiers of the Elite Team:

Our nation’s security is under attack by a rebel group who is armed and very dangerous. Sources tell us that they have just uncovered the location of our President’s secret treasure and they are planning to steal it. Your mission is to get to the treasure before the enemy does and bring it safely back to Fort Dulgarian.

You will first undergo serious training that will prepare you physically and mentally for intense combat situations. This mission is considered very dangerous. Please follow all directions very carefully. Good luck gentlemen.

I made it very clear to all the boys that this was completely optional and if there was anything they didn’t want to do, they certainly didn’t have to, but every boy jumped with excitement for each mission and consequence and there was non-stop smiles for this activity! 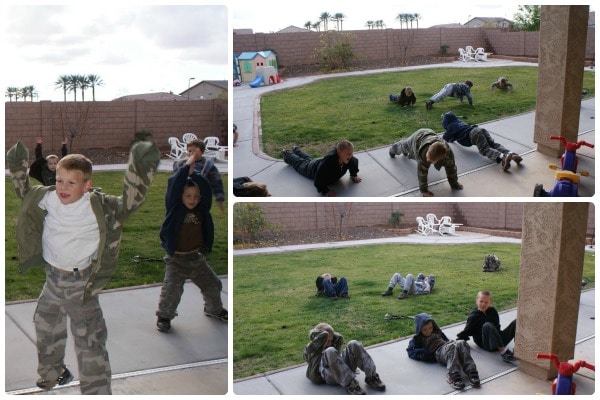 We went outside and began basic training. First, I had them doing sit ups, jumping jacks and push ups in the backyard as well as some basic math problems for the mental training. The boys were having a blast!

Following basic training, they were sent on their secret missions. (Example of missions below) The missions were no-big-deal, but the fun part was after each mission was complete and they had to see if all their men “made it out alive.” When each mission was done, I drew a piece of paper out of a paper bag with different “outcomes” printed on them. (Read our outcomes below)

After the outcome was chosen, we drew 2 names out of a different paper bag to see who it was that would have to hop on one foot or loose the use of their arm etc. One little boy never had his name chosen, but other boys had their names drawn multiple times which made them blind, unable to speak and hoping around!

1. In the backyard of Fort Dulgarian, each member of the elite team must run 2 laps around the bike path. 1 lap you must run normally, the next lap you must run backwards. Once you have completed this task, you will receive notice of task #2.

2.Each member of the elite team must toss the ball into the basket before retrieving your clue to mission #3.

3.Take this mail key to the mailboxes and retrieve the mail for the day. You must correctly guess the right mailbox, or you will not move on to task #4.

4.Return back to Fort Dulgarian and line up on the driveway in a perfectly straight line with the tallest one in the front and the shortest one in the back.

5.You must choose 4 men to each take a turn on this bike. Each rider must go all the way down to the stop sign and back.

6.Using sidewalk chalk, each of you must draw a picture of an army tank or airplane.

7. Each member of your team must successfully cross the monkey bars at the park. (This was probably my favorite! So funny seeing the “blind” guy with “one arm” try to get across!- We helped them of course!)

8. Each of you must choose a partner. One person must carry their partner on their backs all the way back to Fort Dulgarian.

9. You and your partner must sing one of the following songs together: The Itsy Bitsy Spider, Twinkle Twinkle Little Star or Jingle Bells

10. The President’s treasure is in the place where the birthday boy sleeps at night. Hopefully enemy forces have not made it there first! When you find the treasure, please return back to the Family room for cake and ice cream! Good job gentlemen!

Here were the possible outcomes:

I gave them the option to just have the outcomes in effect until the next mission, but many of the boys wanted to keep going with them, so there were blind boys missing both legs and arms by the end of the party.

-Your team was ambushed and 2 of you lost an arm in the fight. Tuck your arm inside your shirt sleeve for the rest of the mission.

-Your team was attacked by armed men. Two of you were scared so bad, you cannot speak. Put a piece of tape over your mouth or use your bandana to cover your mouth until you complete the next mission.

-Your team went through a field of land mines and 2 of you lost the use of 1 arm and 1 leg.

-Enemy forces have already completed this mission. They know you guys are on their trail, so they set a bomb to explode right now and 2 of you were killed. Follow your team as a ghost and do not participate in the next task.

-Two soldiers are fatigued and need to be carried to the next mission.

– The medic treated your entire team. All of you have been healed from whatever ailments you have.

Here are some pictures of our army birthday party: 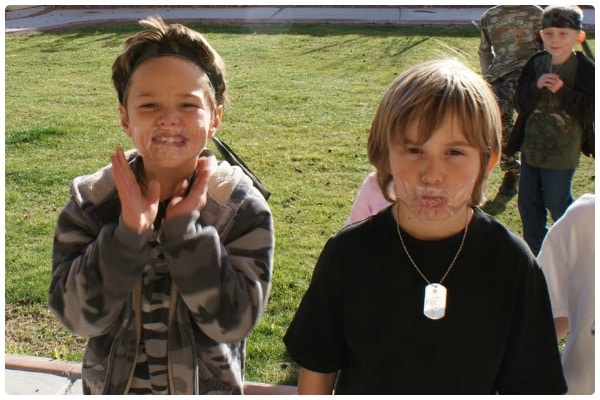 Mission #1 ended in 2 soldiers being so scared they couldn’t speak. The boys both wanted a piece of tape on their mouths. 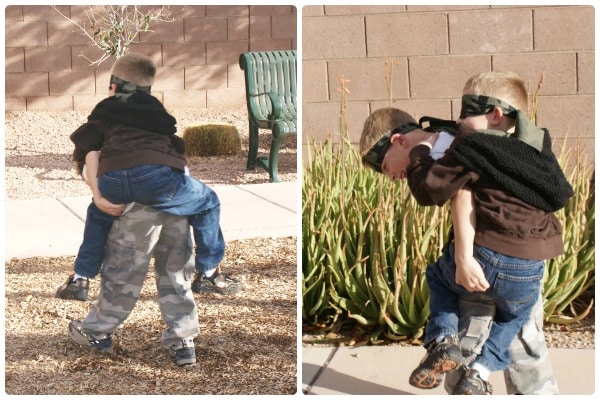 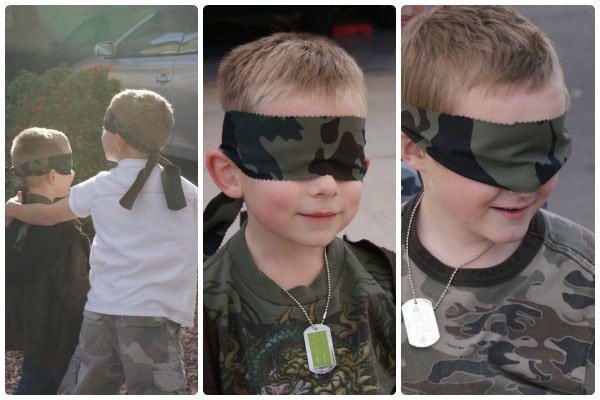 When they went blind, their headbands covered their eyes. The boys had a blast and it was funnier than I thought it would be! (Look at the 1 armed man leading the blind man to the park!) 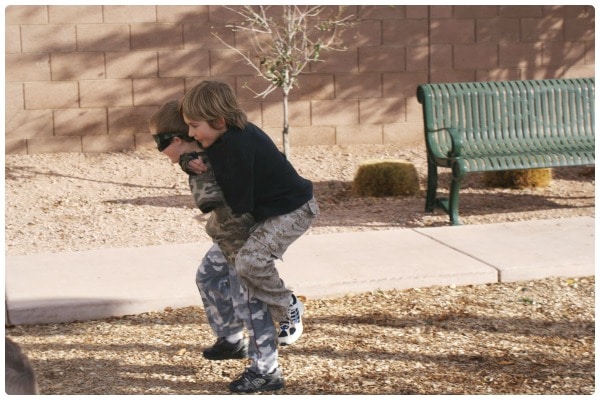 This was the best! These two are brothers- boy #1 was blind, but had the use of both legs, so boy #2 who couldn’t walk was telling the blind where to go- almost walking into walls and into people’s yard! Me and my husband were almost dying of laughter! 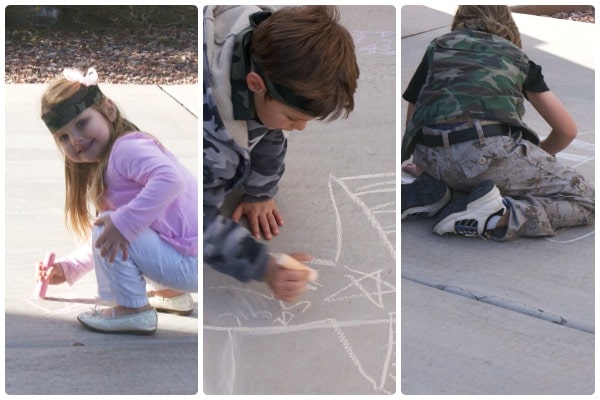 They found the bag of “gold” on Ethan’s bed and then we opened presents, had cupcakes and ice cream and sent them home! Easy party, not a lot of preparation and a TON of fun!