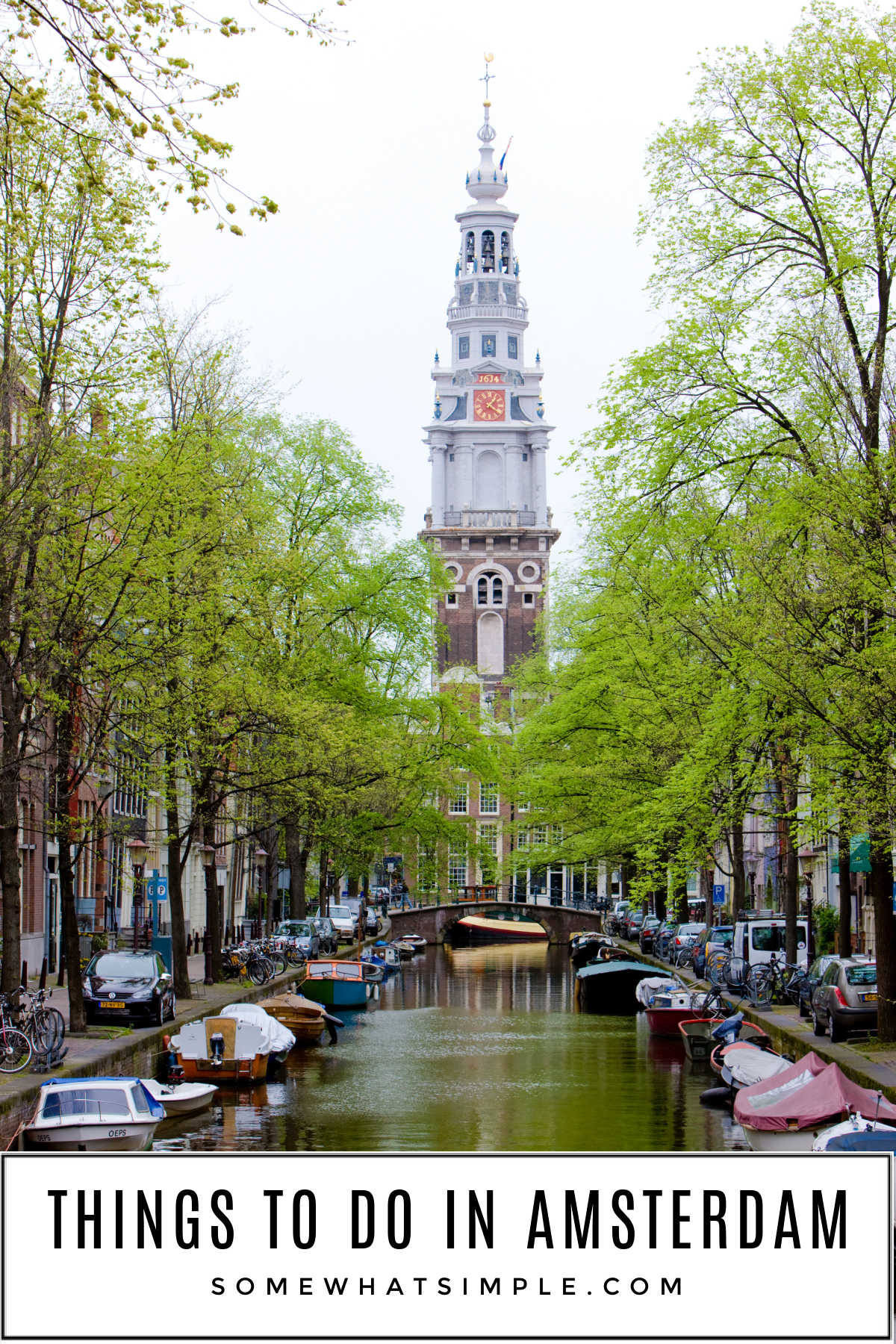 Amsterdam is a top European city with a lot to see and do. Here are the top 5 best things to do in Amsterdam, Netherlands.

The people of the Netherlands are called the Dutch.

While the official language of the Netherlands is Dutch, most Amsterdam residents are fluent in multiple languages and most of them speak English quite well. If you plan to travel to Amsterdam, rest assured you can travel through the entire city quite effortlessly without a knowing word of Dutch.

Where to Stay in Amsterdam

If you’re looking for a fully immersive experience, find a hotel as close to the city center as possible! We walking distance from the beautiful canals and buzzing nightlife, and it made our short stay so much fun!

My friends chose to stay outside city limits and would travel by train each day to do sightseeing. They didn’t love the extra travel time added to their day, and they didn’t get to experience all that we did with our hotel being so close to everything there was to do.

Things to Do in Amsterdam

Amsterdam is an exciting European city known for its windmills, canals, art, shopping, and rich history. It also happens to be one of my favorite cities in all of Europe! If you’ve never been to Amsterdam, add it to your travel bucket list!

With the many tales of red lights and green smoke, we weren’t sure what to expect when we went to Amsterdam. It ended up being absolutely amazing and unlike anywhere we have ever been! It was definitely one of the highlights of our entire trip!

You absolutely have to visit the Anne Frank House on your visit to Amsterdam. It is an incredibly solemn experience walking through the house while visualizing what it must have been like for a family to be hiding from the Nazis during World War II. It was truly humbling.

I would strongly recommend reserving your tickets online before you go. Online reservations sold out over a month in advance and the standby line was over an hour when we arrived for our tour.

Rent a bike from one of the many shops and explore the city like a local. There are literally bikes EVERYWHERE and it’s a thrill to ride among the chaos.

After you’ve blanketed the city, pedal your bike out into the countryside. Behind the train station, there are 3 ferries that will take you across the water at no cost. Once across, we just followed the canal through town, and within 15 minutes, we were out of the city and riding by farmhouses and green fields.

We rode around aimlessly for a couple of hours and just enjoyed the view and the relaxing peace and quiet.

This small cheese shop is about a block north of the Anne Frank House and on the other side of the canal. They sell dozens of varieties of specialty cheeses and several homemade sauces and dips and sampling everything in the shop is FREE.

Their cheeses and sauces make for a delicious souvenir…if you don’t eat it all before you get home! (More details on their website.)

4. Go for a Morning Walk

If you can drag yourself out of bed early enough, you’ll be able to enjoy the unique experience of exploring the city almost all by yourself. We were able to wander the canal-lined streets and back alleys of Amsterdam before the chaos of the day began. The medieval architecture and stunning city backdrop were absolutely gorgeous!

Amsterdam is known for its nightlife and the city is buzzing once the sun goes down. The city was lined with small cafes and restaurants, and we sampled delicious local cuisines that tasted amazing! (The Chocolate Strawberry Dutch Pancakes were amazing!)

While similar in style to the Las Vegas Strip, things can be as wild or as tame as you’d like them to be – especially in the Red Light District.

With plenty of visitors in a busy city, people-watching at night was so much fun!

Coming up with a shortlist of favorite attractions can be difficult when there are literally so many things to do in Amsterdam! Here are a few more things you could do to fill your day –

Do you have any other Amsterdam recommendations or travel tips? Leave a comment below – I’d love to hear your thoughts!