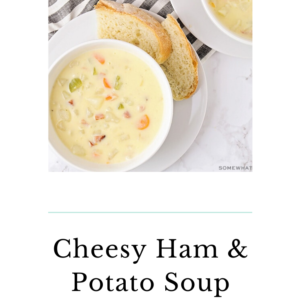 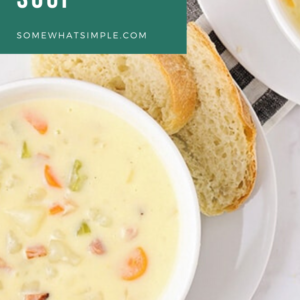 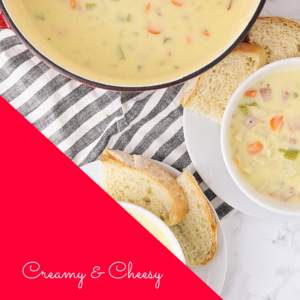 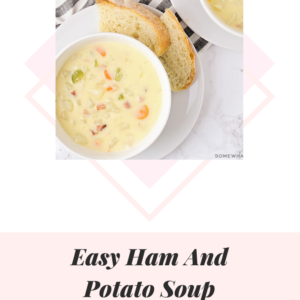 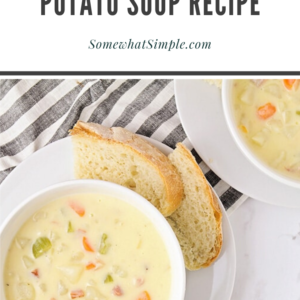 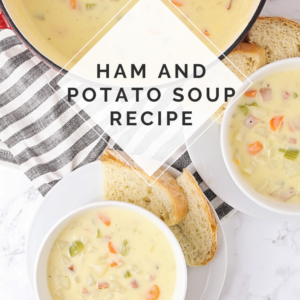 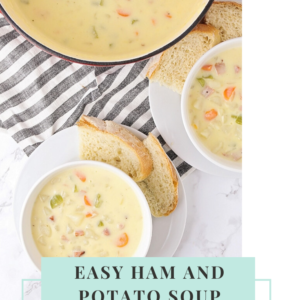 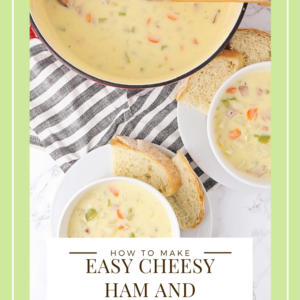 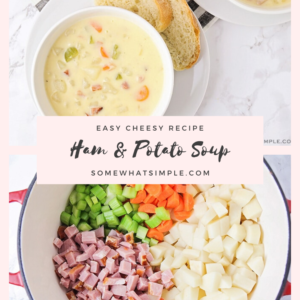 This creamy and flavorful ham and potato soup is the perfect dinner for a cold night. Filled with ham, fresh vegetables and cheese, you won’t find a better recipe!

I love making this soup with leftover ham from the holidays.  Here are a few recipes I love to making using leftover ham – Hawaiian Ham Sandwiches, Ham + Potato Casserole, and Ham and Cheese Quiche. 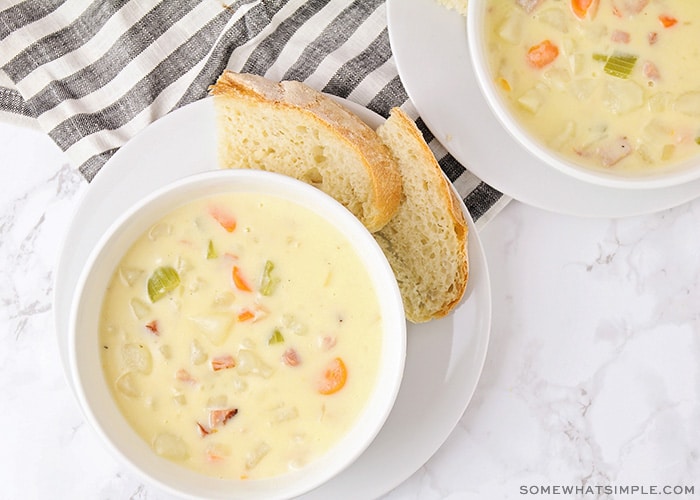 Who else is excited for soup season? I absolutely love soup and it is on heavy rotation at our house now that the days are getting colder. There is nothing better than a warm bowl of soup on a cold night.  This ham and potato soup is definitely one of my favorites to make!

It has the perfect combination of flavors and textures in each and every bite.  Filled with so many delicious fresh vegetables and cheddar cheese, this soup makes for such a hearty and filling meal.  It’s so creamy and cheesy!  Plus, it’s a great way to use up leftover ham you may have so it won’t go to waste.

How to Make Ham and Potato Soup

Prep – This ham and potato soup is so easy to make! To start, chop the ham and all of your vegetables into small bite-size pieces.  Next, you’ll add everything into a large pot.

Heat – Pour in the chicken broth and add the seasonings to the pot.  Bring the pot to a simmer and then let the soup simmer until the potatoes are tender.  This will typically take about 10-15 minutes. 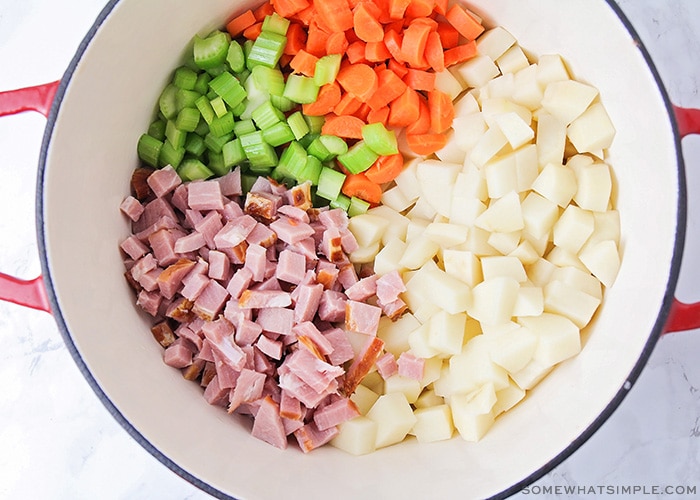 Make The Roux – When the vegetables are nearly cooked, you’ll want to start making the roux.  To make is, start by melting the butter over medium heat.  Stir in the flour until it makes a paste and cook for about 3-4 minutes. Next, you’ll add the milk and half and half to the butter mixture to make a creamy white sauce.  You’ll want to stir the mixture frequently to keep it from burning.

Combine – Pour the sauce into the big pot with the ham and vegetables.  Cook the soup until it is thick and creamy and then remove it from the heat.

Make It Cheesy – It’s technically optional, but I always like to stir some shredded cheese into the soup before serving to make it even richer and more delicious.  I use about a cup and a half of cheddar cheese but you can adjust it to your preference.

Perfect Sides – This soup is extra delicious with some crusty bread on the side for dipping!  I like to serve it with a green salad on the side to make a balanced meal. My kids can be picky at times, but they will never say no to a bowl of this delicious ham and potato soup. It’s always a favorite at my house! 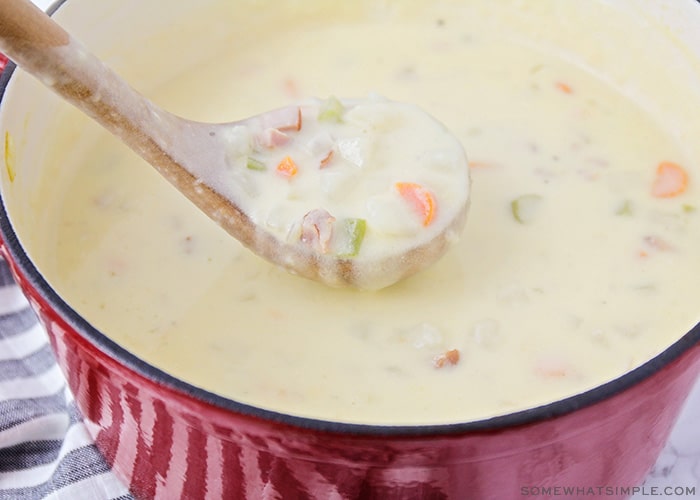 How To Thicken The Soup

If your ham and potato soup is too thin for your liking, adding the cheddar cheese will help thicken it up.  If you don’t want to add cheese to the recipe, adding a little extra flour or some cornstarch can also help.

If you want to add cornstarch, start by adding two tablespoons of it into one cup of cold water, milk or broth.  Stir it until the cornstarch has dissolved completely.  Slowly add the cornstarch mixture to the hot soup and stir it until it has fully mixed in.  You’ll then want to let the soup simmer for about another minute or two while you mix it a little more.

Leave us a comment below and let us know how much you liked this cheesy ham and potato soup.  What are some of your other favorite recipes?  I’m always looking for new recipes to try during the holiday. 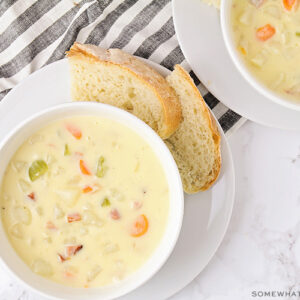 This creamy and flavorful Ham and Potato Soup is the perfect dinner for a cold night. It's simple, delicious, and easy to make!

Nutrition Facts
Ham and Potato Soup
Amount Per Serving (1 serving)
Calories 375
* Percent Daily Values are based on a 2000 calorie diet. 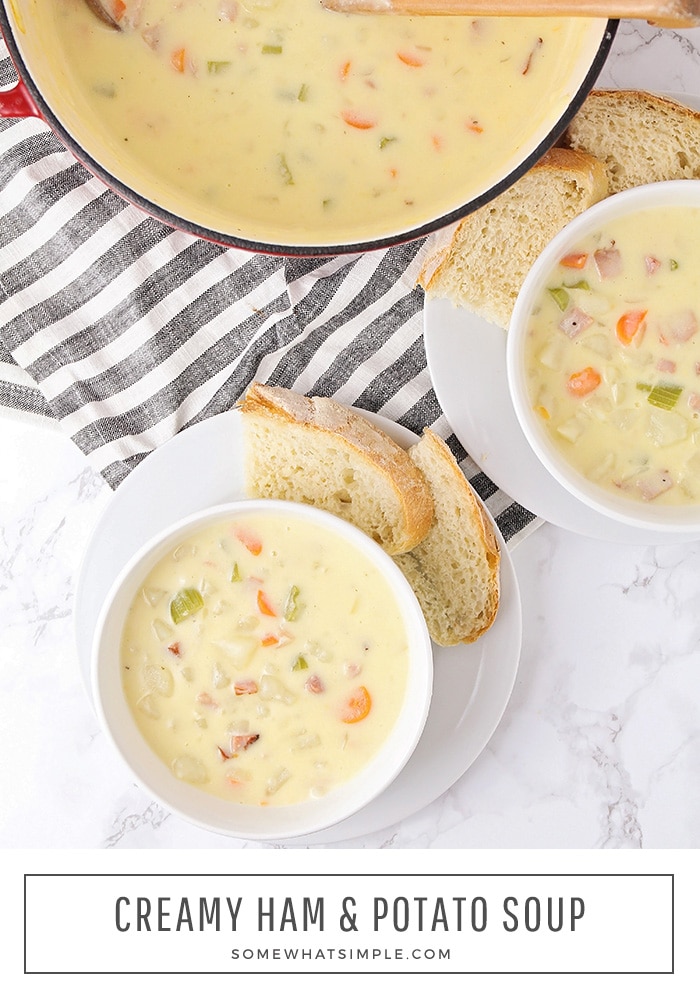